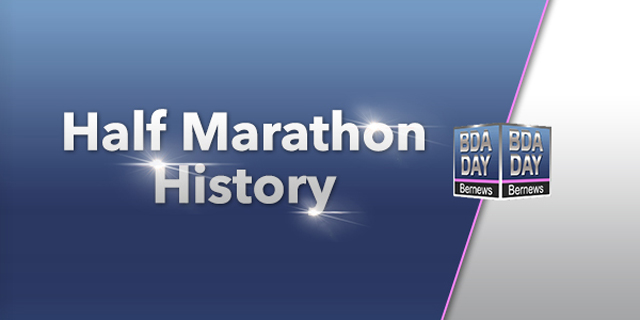 The origins of the Bermuda Marathon Derby can be traced back to May 24, 1909, when a handful of British soldiers challenged a group of Bermudian runners to a competitive road race.

Those British soldiers were intrigued, having spotted some Bermudians running a ‘Go As You Please’ race around Somerset.

Although the soldiers were too late to compete, the locals accepted the challenge, proposing a Somerset to Hamilton route that many of them walked every day and therefore confident of having the upper hand.

Bermuda’s first Marathon Derby race took place a month later. Little did the British soldiers and Bermudian runners know that they were starting what would become the centrepiece of the Bermuda Day Celebration.

The first Empire Day took place on May 24, 1902 across the British Empire; this day would later become Bermuda Day.

The first race was held, starting what is now the longest standing race in Bermuda history.

Race Cancelled Due To WWI

The race was cancelled due to the First World War.

The first Bermudian winner of the race, with John Simons winning in 1 hour, 20 minutes.

The first time the derby had male and female categories, with Merernette Bean-Simmons the first female winner.

The first ever Bermuda Day Parade was held.

The first time the cycling race was held on the holiday, won by Buddy Ford.

The half marathon course was altered slightly to ensure that it spans 13.1 miles.

Parliament passes legislation to move the official Bermuda Day holiday to the last Friday of the month of May; the new law took effect in 2018.

Both the race and parade were canceled due to the Covid-19 pandemic.

Local knowledge did not prove to be the advantage the Bermudians had hoped, however, with Private Jordan, of the Duke of Cornwall Light Infantry, making history as the first winner and Somerset favourite John C. Bean finishing second.

Disappointed not to have defeated the British soldiers, a rematch was granted to the locals, who formed the Somerset Athletic Club and chose a committee of six to organise the next race, which took place on January 16, 1910.

The 13-mile route started from the Princess Hotel in Hamilton to Somerset, with Private Jordan, again emerging victorious, winning in one hour, 17 minutes, with Private Old second and Warwick resident John Simons third.

The British dominated the first six races until 1915 when organisers cancelled the race because of the growing conflict of the First World War in Europe.

When the race resumed on March 30, 1916, the field was depleted of soldiers, as many were away fighting. Only eight men ran, with John Simons becoming the first Bermudian champion, winning in one hour, 20 minutes.

In 1922, George Ratteray was the first Somerset man to win the Marathon Derby and repeated the feat in 1923.

An alternative race, set up by a group known as The Marathon Group, was held annually from 1926 on May 24, then known as Empire Day, for 17 years. The authentic event, staged by the Somerset Athletic Club, continued alongside it and began its association with May 24 in 1928.

With no runner claiming more than two wins during the first 25 years of the race, organisers decided in 1934 that the first three-time winner would keep the trophy.

One of the Marathon Derby’s legendary figures, Stanley Burgess, emerged in 1930, claiming the first of six victories.

The event continued throughout the Second World War, thanks to veteran race organiser John Bean, initially through staging a five-mile version of the race as part of truncated Empire Day activities.

Interest in the race waned after the Second World War; however, Cecil Minors took over the reins of marathon organiser in 1947 and more than helped maintain the tradition.

When only five runners turned out for the 1948 race, Mr Minors recruited the help of the Royal Café owners, Stanley Hodgson, Vorhees Place and Harold Masters, to form the Marathon Derby Committee.

The idea was to finish the race on Court Street, right next to the café, which helped keep the crowds entertained at the bar, thus helping to secure sponsorship and prize money for the race.

In 1949, Arthur Lambert came first in one hour, 25 minutes, as just eight of the 11 starters finished the race; while in 1950, Stanley Burgess pulled off one of the biggest surprises in Marathon Derby history when he won at the age of 49, despite being the oldest competitor.

Arthur Lambert secured four successive victories between 1952 and 1955 before Ed Sherlock broke his streak in 1956; however, Lambert reclaimed the title the following year.

It was Sherlock, however, who reigned supreme from 1958 to 1962. He completed five consecutive wins, which is still a race record.

Twins Neville and Neil Virgil ran the race together in 1964, Neville crossing the line first in one hour, 23 minutes, with his brother coming runner-up just 35 seconds behind.

The following year, Neville won again, fending off a spirited challenge from Ed Sherlock, to win by a 38-second margin in one hour, 19 minutes.

The course was switched in 1966 when the runners had to go from Hamilton to Somerset. It was 19-year-old Thomas Smith who emerged as the headline grabber, returning home to Bermuda from school in Jamaica due to financial issues. He reclaimed the crown the following year.

In 1969, Calvin [Baldy] Hansey won the first of his four Marathon Derby races, breaking the tape in just under one hour, 27 minutes to claim the £100 first prize.

A star emerged in 1971 in the form of Cal Bean. He achieved the first of his five victories, including a hat-trick of titles between 1975 and 1977.

Bean’s 16-year-old sister Merernette Bean became the first “official” female runner in the history of the race in 1976. She posted a time of two hours, 9 minutes.

Debbie Butterfield, the wife of “Iron Man” competitor Jim Butterfield and mother of two-time winner Tyler Butterfield, was the first legendary women’s competitor, with successive victories from 1977 to 1980. She also chalked up wins in 1982, 1986 and 1987.

The women’s race has had several multiple winners. Sandra Mewett also achieved seven wins, including a record streak of five between 1988 and 1992, and Anna Eatherley picked up six triumphs in the 1990s and 2000s.

However, a new era began in 1993 when Kavin Smith smashed the course record to finish in 1:11:27 for the first of nine wins.

It was the start of a period of dominance, and over the following ten years, only Brett Forgesson in 1994 and Tracey Wright in 1998 would interrupt Smith’s stranglehold on the men’s race.

His last victory was in 2003, and Terrance Armstrong, an accomplished middle-distance track runner, won the next three.

While the Marathon Derby was not really a marathon, neither was it a half-marathon in terms of actual distance. That changed in 2007 when the course altered slightly to ensure that it measured precisely 13.1 miles, with Dawn Richardson clinching her second successive title and Larry Marshall taking the men’s race.

In 2008 two modern greats made their mark on the race.

Chris Estwanik destroyed the field and finished in 1:08:25 to set a new record for the half-marathon course.

Chris Estwanik claimed four successive wins before Tyler Butterfield picked up the mantle in the absence of the American born runner who missed the race in 2013 and 2014 because of injuries.

Estwanik returned to reclaim his crown in 2015, when the route began in St George’s for the first time since the mid-1970s but was again struck down with injuries, missing the next four races, however Lamont Marshall started to etch his name into the history books as a three-time winner. Marshall clinched the title in 2016, 2018 and 2019.

Alternating each year between starting in St George’s and Somerset, the 2017 race, which got underway in the East End, belonged to Jay Donawa. Having finished runner-up on eight occasions, Donawa exorcised his demons by storming to victory in his final outing in the Marathon Derby.

The race was cancelled in 2020 due to the Covid-19 pandemic, but when it returned the next year, it was a familiar face, Estwanik, who stole the show by claiming a seventh title, leading home the field from St George’s to Bernard Park in 1:10:28.

In 2022, Chris Estwanik claimed his eighth victory, and Izzy Dutranoit etched her name in race history, claiming her first victory.

Bernews extends thanks to Dale Butler, as his book — Marathon: The May 24th Bermuda Marathon Derby Classic — provided much of the historical information.

If you would like more history of the race, you can view thousands of photos and hours of video of the races held since 2010 here on BDADay.com.

Past winners of the Bermuda Day Half Marathon Derby