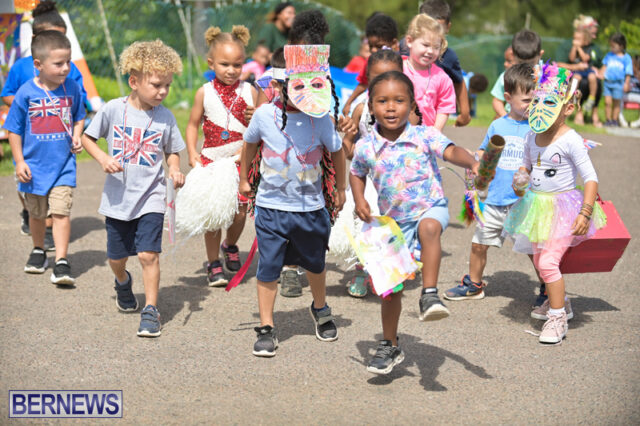 The children at Tree Tops II Preschool celebrated Bermuda Day by putting on a mini-marathon, followed by a parade with floats and costumes.

A spokesperson said, “Tree Tops II Preschool celebrated our 20th anniversary in September 2021 – and some of our floats reflect that. We have five classes of students aged between 18 months and 5 years old.

“At 9.00am, the oldest children took part in a mini marathon with the other students cheering them on. For the mini parade the children have spent the last couple of weeks working on their floats, costumes and banners. They have painted, coloured, cut, stuck, decorated and enjoyed taking part in their group projects.

“The Bluebird Class has our youngest students; their float is a tribute to 20 years of Tree Tops II Preschool. The Longtail Class are our 2-year-olds and they are wearing hats they made to look like Bermuda Onions.

“The Cardinal Class are our younger 3-year-olds representing the Gombeys with masks and a banner they made. The Heron Class are oleanders representing Bermuda’s flora and fauna and it’s beautiful people and Oleander Cycles.

“The Kiskadee Class have made a Bermuda cottage as part of their float; the Bermuda flag made out of rice and on top is a cake they made celebrating 20 years.”